COLUMBIA, S.C. (AP) — South Carolina coach Frank Martin heard all summer about how No. 1 for the third time, and said his team’s version, which started out sloppy and with a long to-do… 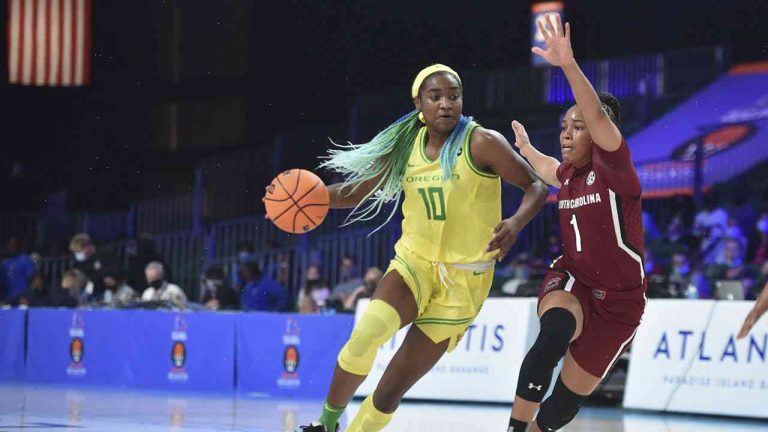 COLUMBIA, S.C. (AP) — South Carolina coach Frank Martin heard all summer about how No. 1 for the third time, and said his team’s version, which started out sloppy and with a long to-do list for improvement, was right.

Chris Silva, T.J. Gibbs and Saben Lee each scored 15 points to lead the Gamecocks to an 80-63 victory over ninth-ranked Oregon on Saturday.

It wasn’t perfect for the Gamecocks (17-2, 6-1 Southeastern Conference), who were sloppy and opened up a 15-point first-half lead before the Ducks (15-4, 4-3) came charging back. Still, South Carolina’s three freshmen trio of Gibbs, Justin Minaya and Lee atoned for a season-opening loss to Xavier by turning the early fight into a rout.

“All of us came in trying to learn something new and getting our feet wet,” Lee said. “We had a lot to play for.”

It certainly looked like time had done it, Martin said.

“I thought our young guys got it, and that’s big,” Martin said.

Freshman center Bol Bol had 18 points to lead the Ducks, who have lost three straight.

The Gamecocks made their first nine shots to race out to a 16-6 lead and Martin wondered aloud how his young team — and a team that had lost twice in its own back yard of Columbia, South Carolina — could be so out of sync.

“If I knew we played like that in those areas, I would be the most disturbed guy in the world,” Martin said.

That’s not how the game started, though.

The Ducks, who were burned for just 30 percent shooting in their first loss, made 9 of their first 12, getting three 3-pointers from freshman Bol Bol, who had 23 in their upset over then-No. 5 Kentucky.

In the end, South Carolina started making 3s, finished with 12 players scoring and was able to close out the Ducks — and the lead — with a 15-2 run that gave them a 73-53 edge.

Gibbs hit a buzzer-beating 3-pointer from the left corner to put the game away, with a couple of Oregon players unsure the ball had gone through the net.

Silva, who had been under national spotlight for much of the season due to an ugly tumble in practice that cost him his starting job, was the big difference maker. He made 7 of 12 shots, including his first 3 of the season, in his biggest test of the season.

“You want a guy to start playing great at his position,” Martin said. “And that’s the role he’s earned.”

Oregon: Bol Bol, who remains the nation’s top freshman scorer, still isn’t feeling 100 percent. Bol had a poor showing in Thursday’s loss to Arizona, finishing with a career-low six points. The Ducks were again minus a standout freshman, leading scorer Payton Pritchard, who sat out after a concussion in a loss at Texas A&M the day before the loss to the Wildcats.

South Carolina: The Gamecocks got a much-needed win, and the raucous crowds that will appear on national television Sunday afternoon should serve them well when they host No. 10 UConn.

The Gamecocks are the nation’s top-ranked team for the third time in program history, starting the season on top before falling to Auburn and North Carolina.

“We didn’t look at that as pressure,” Gibbs said. “We actually tried to create positive things from it. But it’s an honor, for sure.”

Martin was up late Saturday night watching Florida game on cable’s “Outside the Lines” on ESPN2 when he got a phone call from an ESPN executive at the hotel. The executive told Martin the Gamecocks had been named No. 1.

“And to a great team? No, what they said was to a great state?” Martin said. “That’s an honor.”

Oregon plays a makeup game against LSU on Feb. 10 to make up an early season loss.

South Carolina plays No. 10 UConn in its first televised home game on ESPN2 on Sunday.