Alexander Dashiell, CNN • Updated 19th January 2019 ( CNN ) — At least three people have been killed in two separate suicide bombings in the Ugandan capital Kampala on Saturday. There is no… 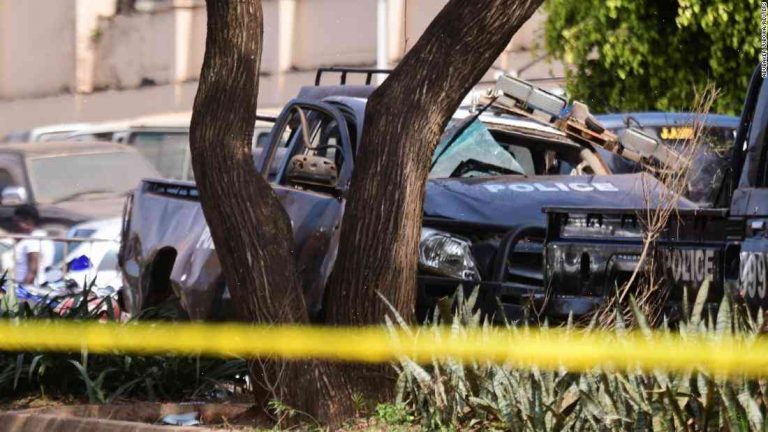 ( CNN ) — At least three people have been killed in two separate suicide bombings in the Ugandan capital Kampala on Saturday.

There is no immediate claim of responsibility for the blasts, which occurred in the early hours.

Among the victims were an eight-year-old boy and a university student, according to Uganda’s national police spokesman, Emilian Kayima.

Eyewitness News, a news outlet in Uganda, reported that there were three explosions, including one at a bus station, and that hospital officials were treating 39 people with serious injuries. There was a large police presence at the scene and police reportedly said there was no immediate security threat in the city.

Kayima said the attack took place in the area of Jinja Road, which is also home to a police station and bus terminus.

He said police “were pursuing” two suspects, including the terrorist responsible for the first bombing, who was a 26-year-old woman. Kayima gave no further details.

Police in Uganda also confirmed on Twitter that they were investigating an explosion outside the Kampala airport.

Kayima said a Uganda Army spokesman “confirmed that the military was already on the ground, making sure that there is no further confusion in the situation.”

Uganda has faced a spate of attacks by the rebel group, the Lord’s Resistance Army, since it was founded in the 1980s. It has vowed to topple Ugandan President Yoweri Museveni, who is in his 35th year in power.

The European Union’s diplomatic mission in Uganda “condemns with horror the two targeted suicide bombings against the Hotel Rwanda and the Kampala Central Bus Station which have killed three people so far,” it said in a statement.

“We’re heartbroken to learn that our colleague Rick Jacobsen, who was recently appointed Ambassador to Uganda, was among the casualties,” the mission added.

Senegalese Prime Minister Abdoulaye Wade said his country stands in solidarity with Uganda in the face of “this senseless act.”

According to Tim Kirksey, a fellow at the D.C.-based think tank New America, Kampala’s international transport hubs, particularly the airport, are “a magnet for terrorist attacks,” because of their increased access to possible recruits and weapons.

Kirksey, who has reported from Uganda for CNN, tweeted that he believed Friday’s bombing was a part of what he called “an imminent surge of domestic violence”: “Ugandan women and girls have been under increasing pressure to conform to gender norms, particularly the demands of restricting their movement, addressing domestic violence, and chaining up if they end up with girlfriends they cannot control,” he said.

Kampala’s police commissioner, Andrew Felix Kaweesi, described the attacks as “a terrorist attack,” saying there had been no intelligence of a plan to target the city.

“The perpetrators have attacked all the hotels where we have security surveillance. We have limited resources and we will pursue the culprits,” he said.

Police believe the bombs were planted by the same person or people involved in a car bombing that killed at least 11 people in June.

Sixteen-year-old Haule Moriku, who sustained injuries in that attack, told CNN she was inside the Grand Nile Hotel at the time of Saturday’s bombing and saw four men, two women and two children escape from the blast site.

“They were just happy they killed people when they got out. One little girl climbed onto a gate nearby and told the guards,” she said.

It was not clear if the victims of Saturday’s explosions were all civilians or also included Uganda military personnel.

Uganda has a record of being hit by terrorist attacks.

In July 2009, a bus bombing at an outdoor meeting at Kampala’s Jomo Kenyatta International Airport claimed 42 lives, while in July 2011, 16 people were killed at one of the city’s shopping malls.

In March 2015, a suspected Islamist terrorist blew himself up in the Kenyan capital, Nairobi, while being trailed by security agents. He is thought to have killed 12 people and wounded more than 50, while injuring at least 10 people in an attack on the Westgate shopping mall.