Image copyright Reuters Image caption The vote was deemed a ‘farce’ by international observers Ortega supporters have voted in Nicaragua in the second phase of presidential elections, a day after polls closed. President Daniel… 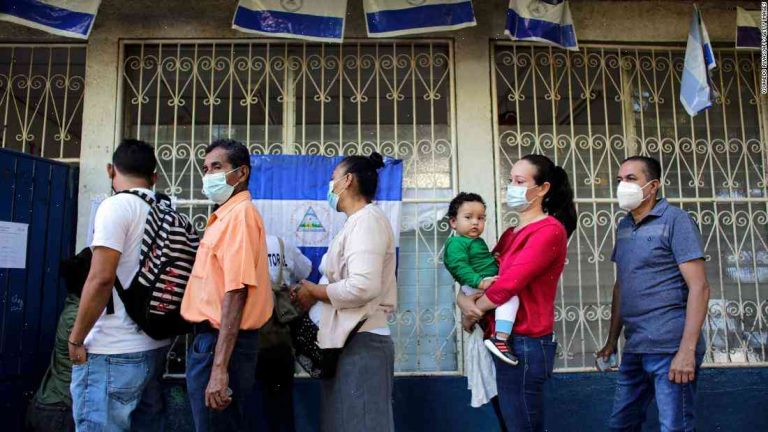 Ortega supporters have voted in Nicaragua in the second phase of presidential elections, a day after polls closed.

President Daniel Ortega is seeking a third consecutive term in the run-off vote after first-round votes were “marred by technical errors and serious violations”, observers said.

The US, EU and other observers said the ballot “demonstrated a marked lack of transparency”.

An opponent of the President, Carlos Fonseca, has called on international observers to monitor the final round on 5 January.

The presidential elections, which were intended to be peaceful, were marred by an apparent deadly shooting incident at a polling station in the capital Managua.

The violence appeared to be a result of supporters of Andres Perez, a former member of the right-wing Sandinista National Liberation Front party (FSLN), who were upset that two polls opened without their votes being recorded, Mr Fonseca said.

A firearms incident was “never the intention” of Mr Ortega’s “cowardly administration”, he added.

The US called on all parties to ensure the election was credible.

“The election had strong elements of conflict, as evidenced by the threats and intimidation of opposition candidates and observers.”

The EU, which provided election observers, said: “The practices we observed were marred by technical errors and serious violations of electoral law.”

The European Union’s mission to Nicaragua, chaired by Dutch politician Edith Schippers, said not all technical irregularities had been addressed and there was “a marked lack of transparency”.

Ortega-friendly candidate Edilberto Rodríguez had won 28.6% of the vote by Friday evening, according to figures from the National Electoral Council.

That would make him the clear front-runner over two other candidates who had received 10.8% and 9.4%, respectively.

But opposition supporters were critical that Manuel Rosales, who had appeared to be attracting significant support, did not register with the electoral authorities.

A number of people witnessed fights between supporters of Mr Ortega’s FSLN party and other groups over who should vote.

A number of former members of the Sandinista government resigned en masse in October because of the President’s plans to stay in power beyond his constitutional term.

The legislative election will also be held on 5 January.

Parliament is controlled by the FSLN and is closely aligned with Mr Ortega.

The opposition will control the lower house of congress.