Written by By Sandee Fogel, CNN On Monday, Iranian President Hassan Rouhani was sworn in for a second four-year term. A Monitor World Special Report in September explored the US-educated leader, who had taken… 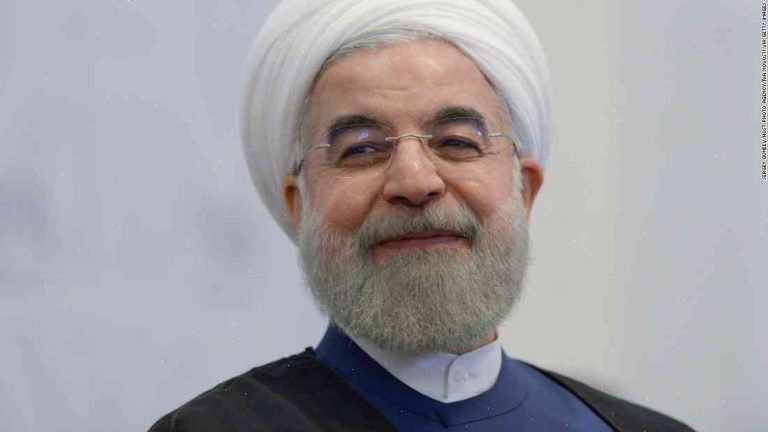 Written by By Sandee Fogel, CNN

On Monday, Iranian President Hassan Rouhani was sworn in for a second four-year term. A Monitor World Special Report in September explored the US-educated leader, who had taken Iran into negotiations to curb its nuclear program in return for some sanctions relief. Many foreign powers, including the US, European Union and United Nations, still maintain an embargo against Iran. His first term, which was punctuated by political protests in Tehran that spiraled into a bloody crackdown, did not settle the standoff.

But even in his second term, the moderate cleric’s challenges are formidable. Here are some of the highlights of his tenure so far:

In 2013, Rouhani called for an end to Iran’s nuclear program. Following diplomatic discussions with the US and the 5+1 group — the five permanent members of the UN Security Council plus Germany — Iran agreed to curb its nuclear activities, agreeing to limit key aspects of its nuclear infrastructure. The deal is expected to reach its full implementation later this year.

But the deal was not the solution that many analysts had hoped for. The opposition Green Movement denounced the nuclear agreement, arguing that Iran was merely gaining a face-saving disguise for its political repression. Opposition activists kept up their protests until last year’s presidential election.

After Rouhani’s re-election in May, the presidential contest became a running debate over President Barack Obama’s nuclear deal. In a televised debate, Rouhani claimed that Iran’s cooperation with the US would have been all for nothing if it had not been for nuclear negotiations. But many Iranians, who believe that the US and its allies are determined to use the nuclear deal against Iran, disagree.

In 2015, Rouhani was re-elected for a second term.

Despite expectations that his second term would be smoother, the presidential election of 2017 was marred by opposition protests, demonstrations and clashes with security forces.

But Iran’s Supreme Leader Ayatollah Ali Khamenei condemned the demonstrations and the supreme court upheld Rouhani’s election win. The protests broke out after the outcome was announced, with some citizens accusing state officials of fraud. Over 800 were arrested and hundreds have been jailed, according to a report by Amnesty International.

Rouhani returned to office with a landslide. In the May election, Rouhani secured 62% of the vote.

Rouhani argued in his second term that lifting sanctions was a necessity for economic recovery. But as the nuclear deal began to come into effect, Iran’s economy has stalled. Unemployment in Iran rose to 12.3% in 2015, and remains at 12.3% in 2016, according to the Central Bank of Iran.

The BBC’s Global Development correspondent, Will Gompertz, said that Rouhani has failed to deliver and “is leaving a very different country” to the one he inherited from predecessor Mahmoud Ahmadinejad.

In September, Rouhani accepted a major responsibility in trying to restore peace in Yemen. He vowed that airstrikes against Iran-backed Houthi rebels would continue.

The Houthis are part of an Iranian-backed group that ousted the internationally recognized government in March 2015. In November, the US and Saudi Arabia declared it was “the first war in modern history to be fought between two permanent members of the UN Security Council and nuclear-armed states.”

US President Donald Trump is expected to make an announcement about Iran, the Islamic State group and North Korea in early May.

Meanwhile, three-quarters of Iranian citizens support the country’s policy of combatting cancer, the president was reported as saying in March. Rouhani, who was diagnosed with gall bladder cancer in 2009, told lawmakers that there is “great need” for action against the disease.